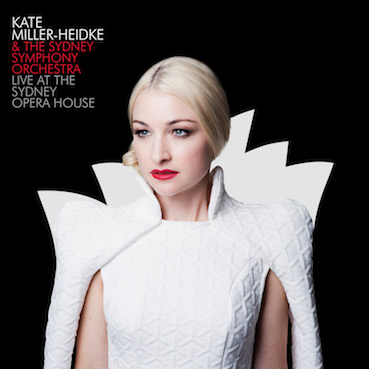 Kate Miller-Heidke is thrilled to announce the release of her new album, Live At The Sydney Opera House with the Sydney Symphony Orchestra. Recorded in March this year, the album is a sweeping live representation of her vast catalogue of hits and fan favourites, including ‘The Last Day on Earth’, ‘O Vertigo!’, ‘Sarah’, songs from The Rabbits and many more. If you’re already a fan, you’ll know most of the songs on this album well. But when the singer-songwriter combines her own material with a symphonic sound, you’re in for a special thrill!

Discussing the album, Kate says, “Performing my songs for three nights in a row with the SSO at the Sydney Opera House was an absolute career highlight, a crazy pinch-myself moment that even now doesn’t seem quite real. The members of the Sydney Symphony Orchestra are a dedicated, passionate group of musicians and represent the pinnacle of what it means to devote your to life to music. To perform with them at your back is, to say the least, a little intimidating. I can’t imagine bungee jumping could be any more exhilarating.”

If there’s something that is common to virtually every song on this album, it’s a sense of drama. That’s a deliberate choice, as Kate attests, ‘I chose the more theatrical songs in my back catalogue so we could really use the orchestra to their full potential. I didn’t want to be standing up the front with an overblown backing band playing semibreves [slow notes], I wanted it to be a collaboration and an equal meeting. I had in mind the need to create a well-balanced concert, and there are a few songs I always like to do, but it has been the songs that were character-based or which had a theatrical narrative behind them that have taken off in this context.’

Central to the collaboration – arranging and overseeing the orchestrations – has been Iain Grandage, who worked with Kate on her opera, The Rabbits, in 2015.

In January 2016, Kate performed a suite of her songs with the Tasmanian Symphony Orchestra at Mona Foma in Hobart, with visuals created by artist Amy Gerhardt. The show won the Helpmann Award for Best Australian Contemporary Concert for 2016. It was this very special collaboration that lead to further live dates with Australia’s finest Orchestras and ultimately, a date with the Sydney Symphony Orchestra.

Miller-Heidke effortlessly traverses the worlds of contemporary pop, folk and opera. She has released 4 albums in Australia, achieving multi-platinum status and appearing in the top 10 album and singles charts numerous times. Her album O Vertigo! debuted at number 4 on the Australian album charts, broke Australian crowdfunding records and was nominated for an ARIA award. Her previous albums include Nightflight, which reached number 2 on the ARIA chart, and Curiouser, which reached double platinum sales in Australia and spawned the multi-platinum hits ‘The Last Day On Earth’ and ‘Caught In The Crowd’. In 2009 she became the first Australian to win the grand prize in the International Songwriting Competition for ‘Caught in the Crowd’.